Sorry! You missed A Raisin in the Sun at Ethel Barrymore Theater 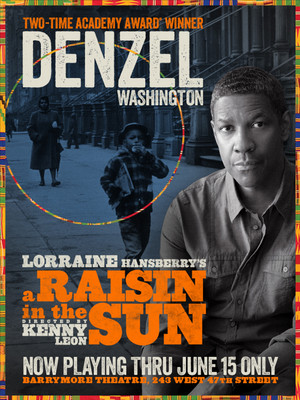 A Raisin in the Sun

A bona fide ensemble piece, in which we're newly and acutely aware of the dynamics that define the Youngers.

Why See A Raisin in the Sun?

A Raisin in the Sun is a heart-wrenching family drama by playwright Lorraine Hansberry which originally premiered on Broadway in 1959 and starred legendary actor, Sir Sidney Poitier.

This highly anticipated Broadway revival sees the extremely talented Denzel Washington fill those shoes as he plays the title role of Walter Lee Younger, the play's ambitious but misguided central character. He stars alongside LaTanya Richardson Jackson, who was nominated for a 2014 Tony for her performance.

This historic 2014 revival was nominated for 2014 Tony Awards in five categories, of which it won three. It scooped up the Tony Awards for Best Revival of a Play, Best Direction of a Play for Kenny Leon and Best Performance by an Actress in a Featured Role in a Play for Sophie Okonedo.

It runs at the Ethel Barrymore Theatre, the very same venue in which the original play debuted almost 55 years ago, and will be directed by Kenny Leon. The production sees him reunite with Mr. Washington after previously working together on the 2010 Broadway production of Fences, for which Mr. Washington won a Tony award.

About A Raisin in the Sun

A Raisin in the Sun follows Walter and the Younger family, and the troubles which befall them when his elderly mother when inherits a large sum of money. Walter wants to invest in a liquor store, while Mama wants to put the money down on a new home in a white neighborhood for reasons of affordability. As Walter struggles with this dilemma, two characters enter his life who force him to evaluate his social standing, though he does so largely in terms of his financial status.

This landmark drama was one of the very first plays on Broadway to take an in-depth look at the experiences of African-American families in pre-civil rights USA. Although Hansberry's groundbreaking play was initially considered to be a risky investment, it went on to run for nearly two years, received four Tony nominations and was the first play written by an African-American woman to be produced on Broadway.

A Raisin In The Sun is suitable for audiences aged 10 and upwards. Children under 4 are not permitted in the theatre

Two hours and 40 minutes, including one intermission

I did not want to miss the play, but my schedule only allowed me a day... more

A wonderful performance of a classic drama! Great acting, and a story that... more

Sound good to you? Share this page on social media and let your friends know about A Raisin in the Sun at Ethel Barrymore Theater.