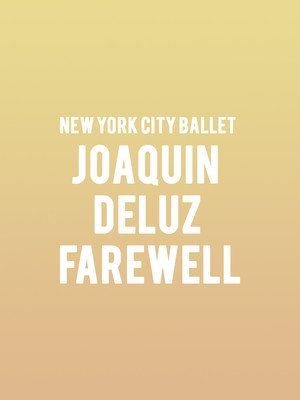 ...a Spaniard with polished charm and virtuoso technique

The New York City Ballet marks the final performance of their Fall 2018 Season with a fond farewell of a show for celebrated Principal Dancer Joaquin De Luz. Graduating from Victor Ullate's prestigious school and company, the Spanish classical dancer embarked on a six year stint at the American Ballet Theatre before he began his NYCB journey as a soloist in 2003. Quickly promoted to principal dancer after two years, De Luz has captivated audiences with his virtuosic technique, emotional depth and vivid characterisations during his 13 year tenure.

Influenced by Russian, French and Cuban classical ballet, De Luz has displayed jaw-dropping feats of kinetic skill and precise control throughout his stellar career, most notably the demanding batterie, or repeated switching of feet in the air. His career-defining roles include principal dances in Balanchine's Prodigal Son and Balle Della Regina as well as originating feature roles in Christopher Wheeldon's Shambards and Peter Martin's Romeo and Juliet.

Please note: This performance's program is yet to be announced.