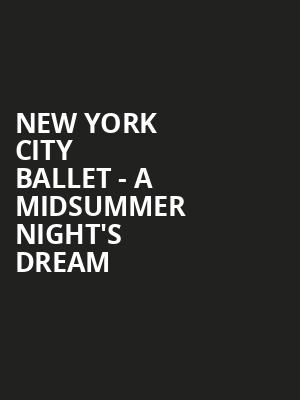 We're always brought back to the special sound world of Mendelssohn's "Midsummer" music with its amazing magic spells hanging in the air, the darting of its iridescent fairies, its captivating contrasts of stillness and speed, its tender romance and its

A dazzling gem in the New York City Ballet's repertoire, ballet master George Balanchine's adaptation of Shakespeare's supernatural rom-com is always a treat for all ages when revived by the company. With quarreling lovers, warring fairies and a group of baffled actors rehearsing a play all navigating in the same enchanted forest, the NYCB fill the stage, breathing life and energy into the epic storyline as set to Mendelssohn's irresistible score. Expect flowing costumes, lush sets and beautiful dancing in this unforgettable production.

A Midsummer Night's Dream focuses on these three parallel stories while dealing with the universal theme of love and its complications. It follows the trials of two couples as they camp in a magical forest, the world of the fairy King and Queen who inhabit said forest and a group of tradesmen attempting to stage a production of 'Pyramus and Thisby' for the wedding of the Duke of Athens. In true Shakespearean comedy-style, these stories don't stay separated for long and worlds collide in a spectacularly hilarious fashion. Love, action, magic, and comedy mix to create a truly magical spell.

Sound good to you? Share this page on social media and let your friends know about New York City Ballet - A Midsummer Night's Dream at David H Koch Theater.