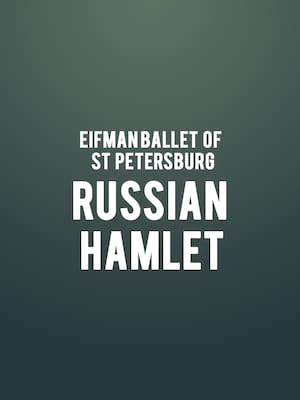 Mr. Eifman has a way with electrifying images and theatrical fantasies... that other choreographers do not.

Hailed as one of the leading choreographers in the world, Boris Eifman created his namesake ballet company in 1977 with the goal of solely performing his own work. Over the decades since its inception, the ensemble has become famous for its innovative and unabashedly radical approach to the art form, often drawing inspiration from classical literature and theatre. Don't miss Eifman's radical kinetic spin on Shakespeare's melancholic Danish prince.

The Russian Hamlet distills a whirlwind of jealousy, anger, and passion into visceral dance. Eifman weaves echoes of The Bard's iconic tale with Paul I, one of the most mysterious and contradictory figures in Russian history whilst the St Petersburg Symphony Orchestra plays a stirring score by Gustav Mahler. As Paul descends into a world of betrayal, violence, and vengeance, his sanity and sense of self hangs in the balance.

Sound good to you? Share this page on social media and let your friends know about Eifman Ballet of St Petersburg - Russian Hamlet at David H Koch Theater.