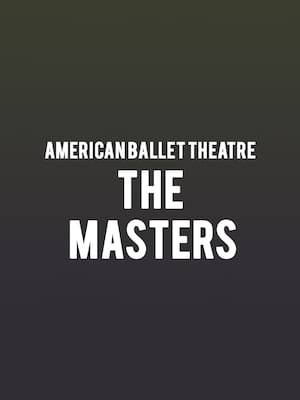 A "ballet in the grand manner" was requested, and that is what he delivered, a scintillating encapsulation of imperial Russian classicism.

The American Ballet celebrates the genius of balletmasters past and present in this rousing triptych of groundbreaking dance. Each program kicks off with the George Balanchine's iconic Theme and Variations, an astounding whirlwind of classical technique and demanding movement set to the final movement of Tchaikovsky's Suite No. 3 for Orchestra in G Major. Choreographed in 1947, it evokes the heyday of Russian ballet and its close relationship with the composer's music.

The company then honors Herman Cornejo's 20th anniversary as a principal dancer in a hotly anticipated Twyla Tharp World Premiere, set to the music of Romantic era giant Johannes Brahms. It marks Tharp's first new production with ABT for ten years. The evening comes to a close with Artist In Residence Alexei Ratmansky's The Seasons, an abstract and re-energized vision of Marius Petipa's 1900 ballet, set to the music of fellow Romantic composer Alexander Glazunov.

Sound good to you? Share this page on social media and let your friends know about American Ballet Theatre - The Masters at David H Koch Theater.