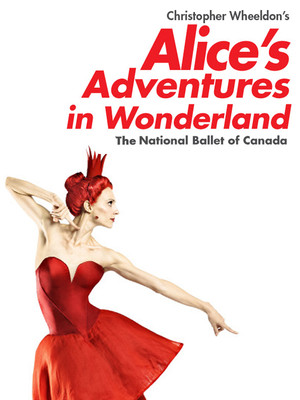 Don't be late, New York City! You'd hate to miss this New York premiere of The National Ballet of Canada acclaimed production of Christopher Wheeldon's enchanting and utterly magical Alice's Adventures in Wonderland. This surreal children's story is brought to life on the stage through Wheeldon's choreography and striking production design.

The production has been called 'sublime', 'irresistibly captivating' and 'brilliantly theatrical' by critics, and is celebrated for as much for its timeless choreography as it is for Bob Crowley's unforgettable sets and costumes. Young audiences will delight in the ballet's many magical scenes, such as the larger-than-life Cheshire Cat with his limbs controlled by puppeteers, while adults will appreciate the darker humor of Lewis Carol's novel.

What is Alice's Adventures in Wonderland about

First published in 1865, Lewis Carol's story follows a young girl called Alice who tumbles down a rabbit hole and into a dream world filled with weird and wonderful talking animals and even curiouser humans. Following the March Hare, Alice meets the Mad Hatter and his nonsensical, unending tea party, the elusive Cheshire Cat and, of course, the highly temperamental Queen of Hearts.

May not be suitable for very young audience members

Sound good to you? Share this page on social media and let your friends know about Alice's Adventures in Wonderland - Ballet at David H Koch Theater.