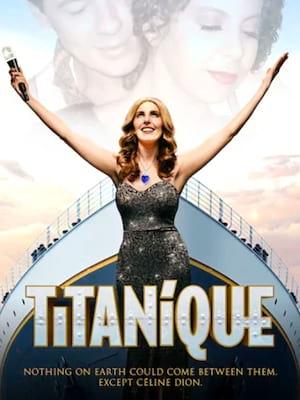 On the heels of five sold-out summer concerts, Titanique, the hilarious musical parody of the 1997 hit film Titanic, featuring the songs of pop icon Celine Dion-will return to New York City this fall.

Near, Far, Where ever you are - don't miss Titanique!

Finally, a musical parody based on the infamous sinking of the Titanic ship comes in the form of Titanique. This world-premiere takes the music of Celine Dion and merges it with the Oscar-winning love story of Titanic to bring you the joyful and hysterical Titanique. It's a one of a kind voyage that you're invited on.

Something considerably bigger than the hit movie phenomenon came in the shape of Celine Dion's famous song, "My Heart Will Go On," which featured as one of the films theme songs. Bring the two together and you have a dazzling concert version of the film and Dion! Be prepared to sing to some of Dion's greats including "It's All Coming Back to Me Now," "I'm Alive," "Power of Love," and "Because You Loved Me" , whilst learning about what really happen to Jack and Rose on that fateful night.

One hour and 40 minutes

Produced and directed by Tye Blue.

Seen Titanique? Loved it? Hated it?

Sound good to you? Share this page on social media and let your friends know about Titanique at Daryl Roth Theater.