Sorry! You missed This Is Our Youth at Cort Theater 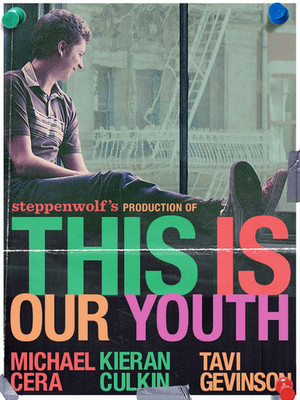 This Is Our Youth

Funny, painful and compassionate... Mr. Cera, Mr. Culkin and Ms. Gevinson imprint highly legible and individual signatures onto their characters, in ways that extend into every inch of their postures.

Why See This Is Our Youth?

A critically acclaimed portrait of youth

Michael Cera and Kieran Culkin star opposite Tavi Gevinson, in this Broadway revival of Kenneth Lonergan's play. This Is Our Youth is a raw portrait of the age bridging adolescence and adulthood, when poor decision making and new opportunities often collide, following three young adults over the course of 48 hours.

The play premiered on Broadway in 1996, and a 2012 production in Sydney, Australia, also featured Michael Cera and Kieran Culkin. This 2014 revival is directed by Tony winner Anna D. Shapiro whose most recent Broadway endeavour, Of Mice and Men, also stars a cast of exceptional, young acting talent.

The production will have music created by Grammy winner Rostam Batmanglij of the band Vampire Weekend. The play is produced by Scott Rudin of the hugely successful Broadway shows, The Book of Mormon and A Raisin in the Sun (which starred Denzel Washington).

What is This Is Our Youth About?

Set in the early 80s in a New York City apartment, This Is Our Youth is a snapshot of two days in the lives of three affluent but disaffected college-age kids. Warren (Michael Cera) has been kicked out of home, but not before stealing $15,000 from his business tycoon father. He crashes at his friends apartment - drug-dealer Dennis (Kieran Culkin) - who seizes the opportunity to use some of the money to buy cocaine, both to use and sell on.

They are visited by anxious but insightful fashion student Jessica (Tavi Gevinson), whom Warren tries to lure in bed using his new-found riches. Having grown up in the 1960s, an era of promise and hope, her insight into their world does much to convey the confusion felt by young adults as they struggle to reconcile their parent's views with their own (often conflicted) opinions.

Two hours and fifteen minutes, including one intermission

Darren Walker: “Made my laugh, cry, and think. I saw it two times in 3 days”

I highly recommend this show. The characters were well developed and masterfully... more

Sound good to you? Share this page on social media and let your friends know about This Is Our Youth at Cort Theater.