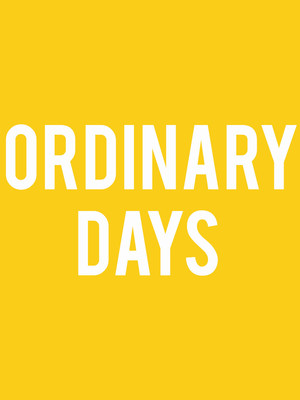 The story is prosaic but touching, truthful, and easily relatable.

Watch the Stories of Four New Yorkers Whose Lives Intersect

New York City based musical Ordinary Days shines a light on how all of our lives are intertwined. The humorous and relatable play features four protagonists who live in the Big Apple and are chasing happiness, love and purpose.

The musical follows characters Claire, Jason, Warren and Deb as they navigate their lives and realise how they are all connected and that even the inhabitants of one of the biggest and busiest cities in the world will inevitably cross paths. Ordinary Days first premiered Off Westend in 2008 and Off Broadway in 2009 to delighted and charmed audiences. The musicals creator, composer Adam Gwon won the 2008 Fred Ebb Award for excellence in musical theatre songwriting and the 2011 Kleban Award in the Lyricist category.

Sound good to you? Share this page on social media and let your friends know about Ordinary Days at Clurman Theatre.