Sorry! You missed The River at Circle in the Square Theatre 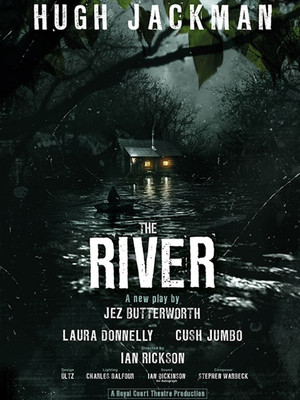 [Hugh Jackman] ascends with assurance to a new level as a stage actor.

Why See The River?

Hugh Jackman returns to the stage

In one of the most highly anticipated castings this Broadway season, stage and screen star, and our 2014 Tony Awards host Hugh Jackman has returned to The Great White Way! He plays the lead in this new production of award-winning playwright Jez Butterworth's acclaimed (albeit disturbing) play, The River, which will run for a strictly limited engagement of just 13 weeks at the Circle In The Square Theatre.

Jez Butterworth is a playwright known for works which toy with the darker side of human nature. His play 'Jerusalem' opened on Broadway in 2011 where it was nominated for a Tony award. Like its predecessor, The River is a bewitching play written in Butterworth's very poetic and often quite searching style which presents man's wild nature alongside the wildness of nature itself.

What is The River about?

The nature of the play and its inherent mystery means that the finer details of its plot and characters should be kept a secret. We can, however, reveal the following: The Man (our nameless and rugged central character) has whisked his new lover away to a remote woodland cabin where he wants to go trout fishing in the darkness of the new moon. As the play evolves we become less sure about his intentions... or of the nature of his relationship with those he entertains at his cabin.

"And the next day I went back to the river, and I took off my clothes and I dived in the water, and I looked for the fish, and I couldn't find it, but when I surfaced, I was holding something. Something else."

The River runs on Broadway

The River received its world premiere in London in 2012 at the Royal Court Theatre. This Broadway production will be directed by the director who helmed the premiere, Ian Rickson, and marks the sixth collaboration between Jez Butterworth and Ian Rickson. Hugh Jackman will star opposite Laura Donnelly - who appeared in the West End production and will be making her Broadway debut in this one - and Cush Jumbo.

On Friday November 28th, the performances times will be at 14:00 and 19:00 only
Please note there are no performances on Thursday 27th November as well as on Christmas Day and New Years Day

Hugh Jackman as The Man

Joyti: “I Slept Through (not with) Hugh Jackman ? ”

Sound good to you? Share this page on social media and let your friends know about The River at Circle in the Square Theatre.