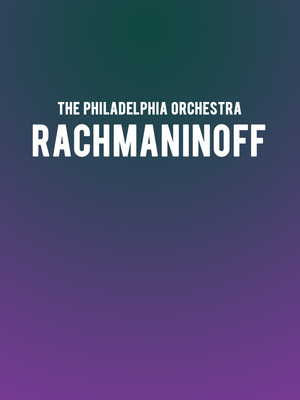 Why See The Philadelphia Orchestra - Rachmaninoff?

The Philadelphia Orchestra returns to New York with this inspired program celebrating works once lost or derided, now considered some of the finest examples from their composers. Opening the evening with Stravinksy's Funeral Song, written on the death of his mentor, Rimsky-Korsakov. Recently discovered at the  Saint Petersburg Conservatory in 2015, the composer considered it one of his favorites, one that sees the orchestra paying tribute to Korskov, each playing a mournful elegy.

Following, there will be a performance of Prokofiev's Piano Concerto No. 3, before a joyful recital of Rachmaninoff's Symphony No.1. A failure at its 1897 premiere, it has since become an essential work, played by orchestras around the world.

Beatrice Rana lends her incredible talents to the event, led by Yannic Nezet Seguin at the baton.

Sound good to you? Share this page on social media and let your friends know about The Philadelphia Orchestra - Rachmaninoff at Isaac Stern Auditorium.