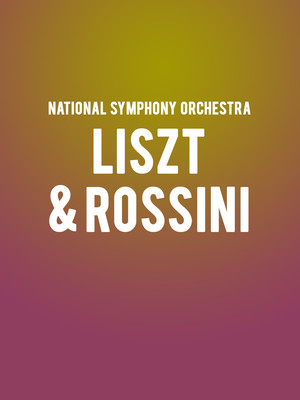 The National Symphony Orchestra returns to Carnegie Hall this summer with this spectacular program led by Music Director and impeccable conductor Gianandrea Noseda. Featuring two of Italy's greatest composers, the event will delve into themes of sorrow and humanity as depicted in works by both - Liszt's extensive exploration of Dante's Divine Comedy, S.109 and Rossini's unequaled Stabat Mater. Both examples of the sheer genius of the composer and the force of the voice, expect to find yourself moved and inspired by the world famous Orchestra and their incredible talents.

Liszt - Dante Symphony, S. 109
A spellbinding trip through Dante's immortal masterpiece, experience the drama and passion of the journey, from the Gates of Hell to Purgatory and beyond.

Rossini - Stabat Mater
Sacred and brimming with emotion, Rossini takes us into the mind of the Virgin Mary as she looks down upon her son on the cross and laments his crucifixion.

Sound good to you? Share this page on social media and let your friends know about National Symphony Orchestra - Liszt and Rossini at Isaac Stern Auditorium.