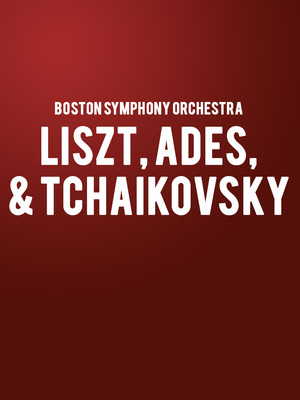 One of the most important collaboration in each artists chapter.

A World Premiere Piece of Work

Liszt - Mephisto Waltz No. 1
Out of the four Mephisto Waltzes Liszt wrote during his life, his first one still remains the most popular of the set and is said to the most beloved piece of work from his entire catalogue.

Tchaikovsky - Symphony No. 4
Written in dedication to his best friend, Nadezhda von Meck. Dedicating a piece of work to someone in Russia meant you considered them as equals, and affirmed Meck as an equal partner in its creation. An intense and magnifying piece, although dedicated to his best friend, depicts a traumatic period in Tchaikovsky's life.

Sound good to you? Share this page on social media and let your friends know about Boston Symphony Orchestra - Liszt, Ades, and Tchaikovsky at Isaac Stern Auditorium.