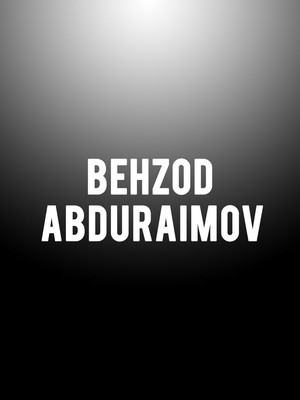 Hailing from Tashkent, the capital city of central asian nation Uzbekistan, rising piano superstar Behzod Abduraimov showed prodigious talent at a young age. Honing his craft under the tutelage of fellow Uzbek and celebrated pianist Stanislav Ioudenitch, his gold medal-winning debut at the 2018 London Piano competition announced a bold new talent on the word stage. Two years later, the dynamic performer is holding court on the hallowed Carnegie Hall stage as part of the Keyboard Virtuosos I Concert Series.

Abduraimov performs a trio of rich story-filled works by esteemed classical masters, beginning with Chopin's Twenty-Four Preludes Op. 28, a thrilling and poetic set of short pieces for piano, one for each of the instrument's 24 keys. This is followed by Debussy's whimsical Children's Corner, a suite for piano and orchestra written for his daughter in 1908. It evokes the mood and fantasies of childhood with lightness, charm, humour and deceptively difficult finger work. The evening comes to a close with Mussorgsky's timeless Pictures at an Exhibition, a dazzling show piece that tests the mettle of even veteran virtuoso performers with its challenging technical demands.

Sound good to you? Share this page on social media and let your friends know about Behzod Abduraimov at Isaac Stern Auditorium.