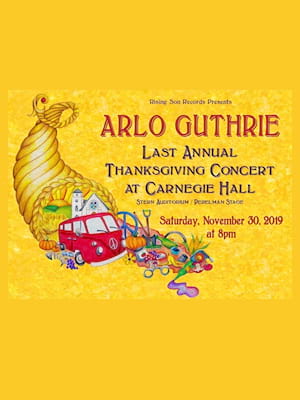 A folk music legend, Arlo Guthrie... is not as lanky as he was at 18 but still had plenty of energy - and the incredible coordination required to simultaneously play a harmonica and finger a 12-string acoustic guitar.

Much like marshmallows and sweet potatoes, cranberry sauce and turkey and the post meal couch-crash, folk singer songwriter Arlo Guthrie's annual Thanksgiving at Carnegie Hall show has become a time-honored tradition in its own right. The story-telling troubadour performs his last ever Thanksgiving concert at the historic venue, celebrating the auspicious event with renditions of his own father, Woody Guthrie's works and selections from his own 60s to present day-spanning catalogue.

With music flowing in his veins, Guthrie did not flounder in his father's considerable shadow, but instead carried his torch and continued his legacy by becoming a singer and political activist himself. Don't miss sparkling anecdotes, insightful tales and soaring renditions of career-defining hits like Alice's Restaurant, City of New Orleans and Massachusetts.

Sound good to you? Share this page on social media and let your friends know about Arlo Guthrie's Last Annual Thanksgiving Concert at Isaac Stern Auditorium.