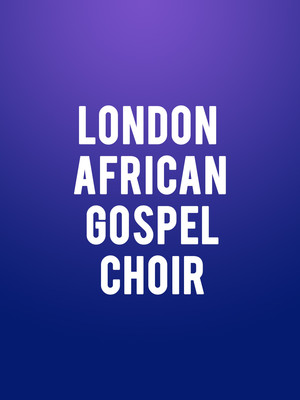 The London African Gospel Choir are clearly onto something good with this show, and the high expectations are more than matched by their performance.

Having first sold out London's Jazz Cafe for a special one-night-only performance to commemorate Graceland's 30th anniversary, the LAGC went on to tour the smash hit success program throughout the UK, further bolstered by live appearances with the Soweto Gospel Choir, Mumford and Sons and Tom Jones. Aside from the albums infectious pop undertones, southern African grooves and soaring choral harmonies, the ensemble gives an effervescence to traditional gospel tunes and and prayer medleys with artful crescendos, heartfelt solos and a passionate spirit that makes them simply mesmerising to watch.

Sound good to you? Share this page on social media and let your friends know about London African Gospel Choir at NYCB Theatre at Westbury.