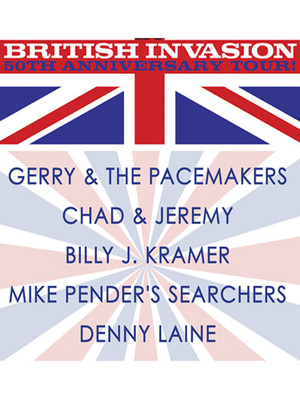 Hear the music that changed everything, from the bands who were there

It's fifty years since The Beatles 1964 appearance on The Ed Sullivan Show sparked what would become known as 'The British Invasion', and now some of the leading lights of this musical revolution have joined forces for an anniversary tour. This special series of concerts is led by Gerry and The Pacemakers, who shared not only their home town of Liverpool with The Fab Four but manager Brian Epstein as well, and are best known for the tracks Ferry Cross the Mersey and How Do You Do It? Among the other acts joining Gerry and The Pacemakers are Mike Pender's Searchers (Needles and Pins) and Chad and Jeremy (Yesterday's Gone).

Sound good to you? Share this page on social media and let your friends know about British Invasion 50th Anniversary Tour at NYCB Theatre at Westbury.