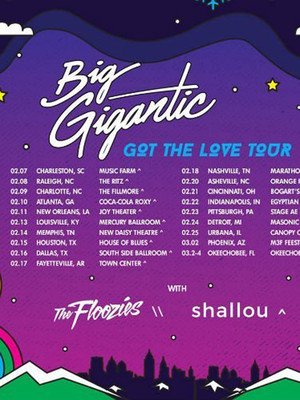 The whole place rocked from start to finish.

One thing Dominic Lalli (Motet saxophonist/producer) is not afraid of is trying new things. Big Gigantic is Lalli's latest project that showcases an array of gripping compositions combining elements of a DJ and a live band setup. 2020 has got off to a flying start for Big Gigantic, having just dropped a fresh single and announcing their new album, it's only fitting that they also announced a tour!

With his band mate Jeremy Salken, Dominic Lalli has created a new musical genre where he combines Jazz with Electronica and Hip Hop. This mix of genres creates a distinctive and futuristic sound which keeps audiences dancing all night long. Big Gigantic has played numerous festivals and have held a residency at the Red Rocks Amphitheatre for the last five years.

This duo are well embedded into the Colorado music scene but they aren't stopping there. With their latest album "Brighter Future" being released last year Big Gigantic bring you the Got The Love Tour as they bring their eclectic fusion of genres to fans across the States.

Sound good to you? Share this page on social media and let your friends know about Big Gigantic at Brooklyn Mirage.