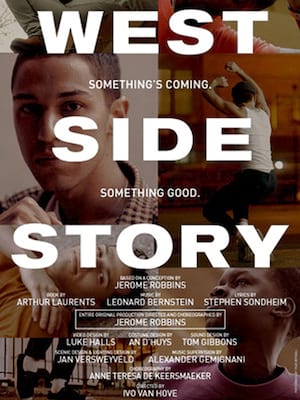 It's bound to be polarizing, but it's definitely not to be missed.

Why See West Side Story?

One of the most highly anticipated new productions of 2020! In 1957 the Great White Way became home to a landmark musical that was conceived by three of America's greatest creative talents. Written, directed and choreographed by iconic ballet master Jerome Robbins, with music and lyrics by celebrated composers Leonard Bernstein and Stephen Sondheim, West Side Story set Broadway alight with its instantly memorable jazz-tinged score, innovative choreography that redefined modern ballet and sweeping romance story.

What Is West Side Story About?

Originally set in Hell's Kitchen in the 50s, Hove's adaptation is sure to depart from its source material in more ways than just choreography, but the heart of its story resonates as strongly now as it did when it first debuted. Based on Shakespeare's Romeo and Juliet, our star-crossed lovers are Maria, a Puerto Rican immigrant and Tony, a young Italian-American.

Their fate is sealed when they first lock eyes at a neighbourhood dance, falling hopelessly in love. But it quickly becomes clear that the violence of the community they live in has forced them to opposite sides of the war between the Sharks, a gang of American Puerto Ricans and the Jets, a gang of white Americans, what with Tony being the former leader of the jets and Maria the sister of Sharks leader Barnardo.

Tensions between the two gangs escalate, leading to a pre-arranged "rumble" - a fist fight that goes awry when switch blades enter the fray. After Tony accidentally kills Bernardo in retaliation for the murder of his friend Riff, the action reaches boiling point and the ensuing racism and bigotry harboured by both sides end in tragic, ultimately fatal consequences for Tony and Maria.

West Side Story's accolades extend far beyond the stage, with its subsequent feature film garnering a whopping ten Academy Awards. Its soundtrack also spent 54 weeks at the top of the Billboard chart, which was 17 more weeks than Micheal Jackson's mega smash Thriller.

Two hours with no intermission

Mary Torres: “Refreshing yet uncomfortable to watch because of the controversy ”

I enjoyed the modern changes in the WSS revival; the open-race casting... more

Sound good to you? Share this page on social media and let your friends know about West Side Story at Broadway Theater.