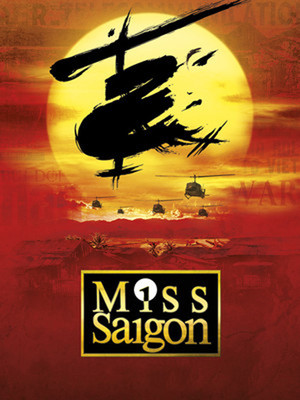 "Miss Saigon was, and is, a phenomenon, and this production, directed by Laurence Connor, is sensational in every way."

the hit epic rETURns TO BROADWAY!

It's been a long time coming, but the hit London-born musical Miss Saigon lights up Broadway once again, following a phenomenal run in the West End. Starring the new revival production are leads Alistair Brammer as Chris and North Carolina-born Eva Noblezada as Kim, who experience the heady love story amidst the last days of Saigon, complete with a revamped helicopter scene to take your breath away. Nominated for two 2017 Tony Awards including Best Revival of a Musical!

WHAT IS Miss Saigon ABOUT?

Based on Puccini's operatic masterpiece Madame Butterfly, and set in the final days of the Vietnam War, Miss Saigon charts the burgeoning romance of an American GI, Chris, and a vulnerable local girl, Kim, who works in a steamy Saigon go-go bar. From the moment they meet, Chris is immediately drawn to her, determined to protect her from the horror surrounding them.

After spending the night together, Chris and Kim realise they cannot ignore how strongly they both feel and pledge their love to each other. However, not even their love is enough to keep the Vietnam War at bay forever, and when Saigon falls, Chris is forced to flee the country. Kim awaits Chris' return for years - but he has since found a new wife back in America. Will Chris return to Kim, or abandon the life they created to the mercy of the Vietcong?

HISTORY IN THE MAKING

Impeccable singing and set design work hand-in-hand to bring the hardship and passion of Boublil and Schonberg's legendary musical to life in this 25th-anniversary revival by Cameron Mackintosh. Miss Saigon was created by the team behind the international hit, Les Miserables, and debuted in London over two decades ago. Now the iconic tragedy is reinvented for a modern audience, and returns to the Great White Way for the first time since 2001!

Suitable for ages 12+ due to mature themes

Two hours and 40 minutes with a 15-minute intermission

The images above are taken from the London revival production

Lianah Sta. Ana will play the role of Kim at certain performances.

Musical theatre lovers will lap up this operatic score

Miss Saigon is a moving production that stimulates all senses. And now, some 28 years after the London-formed musical first premiered on the West End, it has finally returned to Broadway Theatre!

Sound good to you? Share this page on social media and let your friends know about Miss Saigon at Broadway Theater.