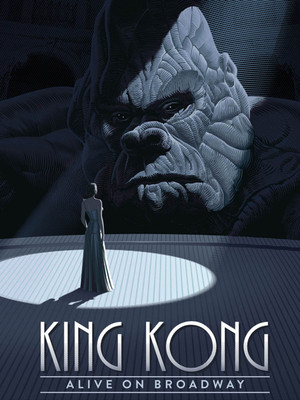 It's not just the mammoth Kong that helps carry the show but also Pitts, who plays the marathon role of Ann with infinite resilience and resolve

He swatted away biplanes from atop the Empire State Building in the classic 1933 movie, and now King Kong returns to New York in a groundbreaking Broadway musical. This epic adventure closely follows the story of the original film, taking us deep into the dark heart of the jungle, and showing man's arrogance in thinking he can control mother nature. At the center of this dazzling production is Kong himself, a giant animatronic puppet which towers over its human co-stars, and requires a team of thirteen stagehands to operate it.

Originally premiering in Melbourne in 2013, King Kong had been slated to hit The Great White Way as soon as 2014. In the intervening years, the show has been completely revamped, with much of the creative team being replaced. The book now comes from JK Rowling's The Cursed Child co-writer Jack Thorne, while buzzed about director Drew McOnie (In the Heights) is at the helm.

This musical picked two 2019 Drama Desk Awards for its innovative Projection Design and mesmerizing Puppet Design and was nominated for three 2019 Tony Awards for its Lighting, Scenic and Sound Design, so there's no doubting that this Broadway show is a visual masterpiece.

King of the Apes

One of Hollywood's greatest achievements, the original King Kong set the template for every monster movie that would follow. Featuring amazing stop-motion effects, and an iconic scream queen performance by Fay Wray, Kong proved to be a huge hit, and has since been remade twice, once in 1976, and again in 2005 by Lord of the Rings director Peter Jackson. Kong appeared on screen most recently in 2016 in Kong: Skull Island, a loose adaptation that updated the action to the 1970s.

What is King Kong About?

At the height of the Great Depression, a lonely ship makes it way out of New York harbor, bound for the remote Skull Island. On board is a film crew under the direction of the ambitious Carl Denham, as well as leading lady Ann Darrow, a struggling actress who thinks she has landed the part of a lifetime. Little does she know the horrors that await her, for Denham has not chosen to shoot on Skull Island just for its beautiful scenery, but because he has heard whispers of a terrifying monster that lurks in its jungle.

After landing, the crew stumble upon the island's natives, who kidnap Ann and present her as an offering to their god 'Kong'. The rumors Denham has heard are proven all too true when a gigantic ape emerges through the trees and snatches Ann away. The crew follow in hot pursuit, with the aim of not only rescuing Ann, but also of capturing the beast and taking him back to America.

Prepare to be amazed

You don't have to explain who King Kong is to most! The iconic character became a household name from his first appearance in the 1933 film starring Fay Wray (Ann Darrow).

Seeing "King Kong" on Halloween was the capstone of my honeymoon in Boo... more

BSB: “Kong is Magnificent - and Fun!”

Trust audiences, this show is great and like nothing else on Broadway.... more

Sound good to you? Share this page on social media and let your friends know about King Kong at Broadway Theater.