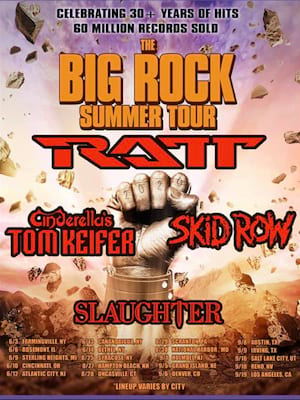 American classic heavy metal legends RATT, Skid Row, Slaughter and Cinderella vocalist Tom Kiefer have united to announce the Big Rock Summer Tour. The massive trek runs in two legs, the first taking place through late-May-June with stops including Nashville and Cincinnati. Leg two picks up on August 25th in Syracuse and runs through to the closing show at the Hollywood Palladium LA on September 19th.

Together the four acts have sold a combined 60 million records across three decades, cementing them in heavy metal history books. RATT are back on top form with new drummer Pete Holmes and bassist Jordan Ziff joining core members Stephen Pearcey and Juan Croucier since 2018. Tom Kiefer is known as the vocalist for the band Cinderella and released his third solo album 'Rise' in 2018. Hard rock mainstays Skid Row have continued to carry the genre's torch since their first two albums went multi-platinum in 1989 and 1991 respectively, whilst fellow multi-platinum sellers Slaughter complete the killer line up.

Sound good to you? Share this page on social media and let your friends know about RATT, Tom Keifer, Skid Row, and Slaughter at Bethel Woods Center For The Arts.