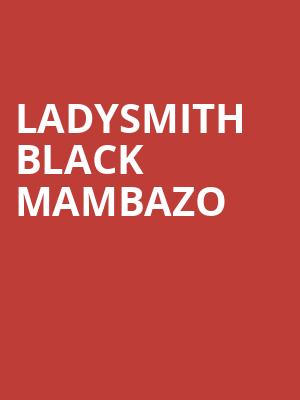 While popular in their native South Africa through the 60s and 70s, it wasn't until they were featured on Paul Simon's 1986 album Graceland that vocal group Ladysmith Black Mambazo came to the wider world's attention. Their beautiful harmonies on tracks like Diamonds on the Souls of Her Shoes and Homeless sparked a surge of interest in African and world music as a whole and elevated the group to superstar status. Since then they've won a bucket load of Grammys and performed with Dolly Parton and Natalie Merchant. They even appeared in Michael Jackson's Moonwalker video.

Their 2013 record, Live: Singing for Peace Around the World, received a Grammy Award and dedicated to the late great Nelson Mandela. Mandela was a big supporter of the group and had hailed them South African Cultural Ambassadors shortly after his release from prison.

Undoubtedly the most famous African musical group of all time, don't miss Ladysmith Black Mambazo as they tour North America this year

Sound good to you? Share this page on social media and let your friends know about Ladysmith Black Mambazo at Bethel Woods Center For The Arts.