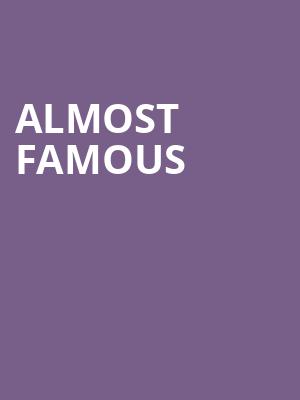 Photo by israel palacio on Unsplash

As shimmering as a stadium of lighters during a Led Zeppelin encore.

Brand new on Broadway! Take a trip back to the heady summer of 1973 with this brand new stage adaptation of Cameron Crowe's Academy Award-winning film and semi-autobiographical account of his time as a rookie reporter for Rolling Stone. Tasked with following up and coming band, Stillwater, Crowe's tale follows 15-year-old William Miller as he dives head first into the debaucherous rock and roll scene. This Broadway premiere comes after an acclaimed run at San Diego's Old Globe. Featuring a book by Crowe, direction from Jeremy Herrin and a new score from Tom Kitt, expect a nostalgic coming of age opus where seemingly nothing is off limits. Incendiary!

Released 20 years ago, Almost Famous was a critical and box office hit that pitched the highs and lows of the era perfectly, beginning with Miller's flight from his strict mother into the bohemian world of rock musicians, groupies and more. At first dazzled by the endless party, Miller soon comes to realize that his idols, though inspiring, are human after all. In between the pain of first love, unexpected betrayal and trying to file his copy on time, there are shining moments of connection and friendship that make the journey one he'll never forget.

Alongside Pulitzer Prizer winner Kitt's new sounds, the production will also utilize the movie's classic soundtrack, including songs from Led Zepplin, David Bowie, Elton John and many more. If you loved the film, this is the show for you!

Two hours and 45 minutes, with one 15-minute intermission.

Sound good to you? Share this page on social media and let your friends know about Almost Famous at Bernard B Jacobs Theater.