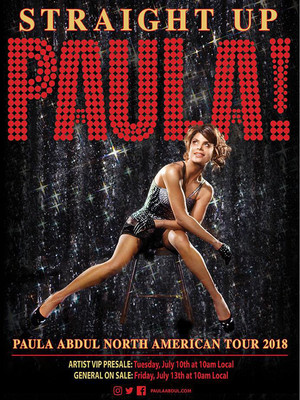 She may be best known to younger generations as a host on American Idol and So You Think You Can Dance, but Paula Abdul was one of the biggest names in 80s and 90s pop.

Graduating from her career as a choreographer (to Janet Jackson among others), Paula hit the big time with her 1988 album Forever Your Girl, a collection of R&B and New Jack Swing infused tracks like 'Opposites Attract' and 'Straight Up', which became the biggest-selling debut album of all time. The subsequent years included many more smash hits, choreography gigs for movies like Big and American Beauty, and a move into TV hosting. To celebrate her 30 years in showbiz, Paula is launching this massive Straight Up Paula! tour across the States. Expect all the hits and some seriously good dancing.

Paula Abdul pleased all her true fans in the hall in Lynn last night with... more

Tom McNeely: “The Crowd was on Their Feet!”

It was a fantastic show! From the moment Paula stepped onto the stage... more

Sound good to you? Share this page on social media and let your friends know about Paula Abdul at Bergen Performing Arts Center.