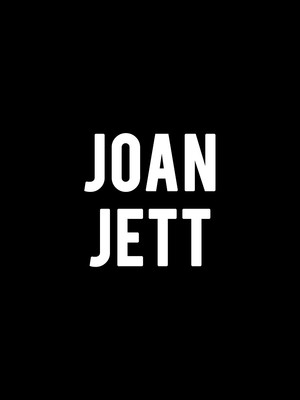 Her voice is perfectly husky and her former adolescent insolence has become an instinctively tough attitude... Jett has an assured melodic touch; she gets under the skin of every song

All Hail The Reigning Queen Of Rock & Roll

Since co-founding pioneering all-girl punk outfit The Runaways in 1975, Joan Jett has marched, and played flaming rock riffs, to the beat of her own drum, emerging as one of the most important and influential female figures in rock and roll history. Never allowing her gender to overtake the agenda, Jett broke through to the mainstream with stripped-down, good old fashioned, loud and hook-laden songwriting and continues to rule the stage with her backing band the Blackhearts, with whom she released seminal cover 'I Love Rock 'n Roll' in 1982.

A living legend in every sense, the Rock and Roll Hall Of Famer takes to stage with a veteran sense of calm and cool, reeling off hit after hit on her trusty electric guitar and distinctive vocal growl. Eliciting crowd interaction and mass singalongs of classic tunes like 'I Hate Myself For Loving You' and 'Bad Reputation', the seasoned performer may be entering her sixties, but still rocks harder than anyone half her age in her trademark all-leather look and heavy eye makeup.

Sound good to you? Share this page on social media and let your friends know about Joan Jett at Bergen Performing Arts Center.