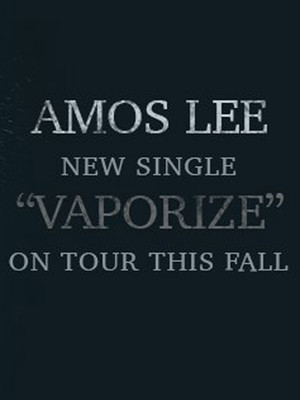 An insightful songwriter and soulful vocalist

One of todays folk heroes

One of the shining stars of modern folk, Amos Lee crosses the genres of folk, soul and jazz and calls on Stevie Wonder and James Taylor as major influences. His 2011 album 'Mission Bell' topped the Billboard charts and included contributions from Willie Nelson among others. His follow-up album, 2013's Mountains Of Sorrow, Rivers Of Song, may have been met with mixed reviews, but as with any singer-songwriter of this genre, it's at a live performance where the magic is truly made.

His musical break came only after a stint as an English teacher at a second grade school in Philadelphia, alongside which he was a part-time bartender at local music bars. This musical influence saw him performing at open mic nights as be built up a network of industry contacts, one of which happened to be Bob Dylan's manager and, as they say, the rest of history.

full of energy and song can't ask for anything mores more

Amos Lee and his crack band delivered a great show last night at the Queen... more

Sound good to you? Share this page on social media and let your friends know about Amos Lee at Bergen Performing Arts Center.