Sorry! You missed This Is Spinal Tap at Beacon Theater 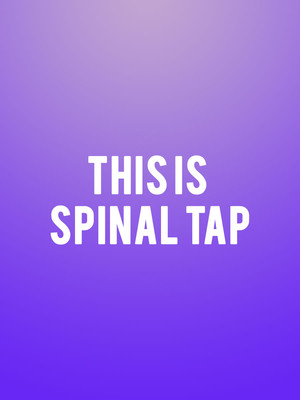 This Is Spinal Tap

The greatest laugh-out-loud comedy of the 80s, Spinal Tap has turned out to be an amazingly influential film, without even taking into account a few Tap revival tours, videos and an appearance on The Simpsons

Why See This Is Spinal Tap?

These Go To Eleven

Emmy Award-winning director Rob Reiner's 1984 mockumentary This Is Spinal Tap achieved legendary cult status thanks to its tongue-firmly-in-cheek portrayal of a fictional rock band attempting to ascend to the halls of classic rock Valhalla. Celebrating its 35th anniversary this year, the film enjoys a special screening at the 2019 Tribeca Film Festival, bringing together creators and actors Michael McKean, Harty Shearer and Christopher Guest, as well as Reiner for a panel and live musical performance thereafter.

Theatrical, ridiculous and OTT whilst still being a wry commentary on the pitfalls of the industry and the notion of fame, Spinal Tap follows the titular English rockers, hailed as the loudest band in the world, as they plot and undertake a North American comeback tour in support of their latest record Smell The Glove. So beloved are the trio, their misadventures and iconic one liners (armadillos in your trousers anyone?) , they've inspired fans to create a history based on the film, one that includes a succession of drummers that have all died under mysterious circumstances.

Sound good to you? Share this page on social media and let your friends know about This Is Spinal Tap at Beacon Theater.