Sorry! You missed The Allman Family Revival at Beacon Theater 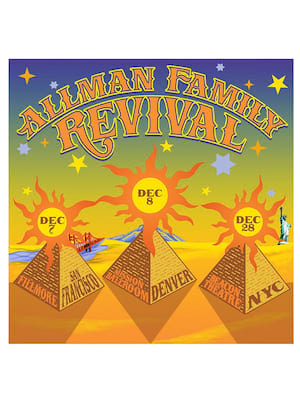 All the feels were felt and this night has become a year end tradition and a fan favorite. People fly in from all over the world for this one.

Why See The Allman Family Revival?

Returning for the third time to celebrate iconic American classic rocker Gregg Allman's birthday, the Allman Family Revival will play three concerts across the US this winter. Stopping off in New York, San Francisco and Denver, the tribute show features Allman's son Devon as the host, as well as a roster of celebrated acts including The Allman Betts Band, Cheap Trick's Robin Zander, Todd Park Mohr, Eric Krasno and Samantha Fish, amongst others!

The popular concert initially started as a celebration of the life of the Southern rock pioneer on what would have been his 70th birthday. Thanks to a reputation for four-hour shows and epic jam sessions, it quickly became a firm fan favorite. This year, the Allman Betts Band will begin with a warm up slot, after which Devon will invite guest stars to stage to sing the songs that made them famous, as well as a selection from Allman's catalogue. A portion of proceeds goes towards after-school-music charity School Of Rock.

Sound good to you? Share this page on social media and let your friends know about The Allman Family Revival at Beacon Theater.