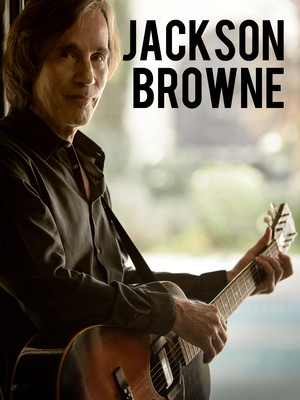 Jackson Browne's sensibility is romantic in the best sense of the term: his songs are capable of generating a highly charged, compelling atmosphere throughout, and - just as important - of sustaining that pitch in the listener's mind long after they've e

For some, Jackson Browne is a definitive voice of the sun-soaked, mellow Southern California vibe that emanated from Laurel Canyon and spread far beyond in the mid-60s and 70s.

When his debut album came out in 1972, the world got to hear his exceptional talents. His moving, literate songs such as haunting 'These Days', and the mind-blowing ' Running on Empty' and 'Doctor My eyes' have become part of the pop culture map, inspiring the generation to come, along with peers Crosby Stills and Nash, Carole King and James Taylor.

He began his career at 16, playing legendary folk clubs, like the Troubador, before taking a trip to Greenwich Village, New York City where his raw talent was noticed and he became, at 17, a staff writer for Electra Records, where he wrote for artists such as Tim Buckley, Nico and The Velvet Underground. He was called "new face to look for" by Rolling Stone magazine, and soon after before released the sublime 'Jackson Browne' with Geffen Records and gaining national, and worldwide acclaim.

This year, you can catch Browne in New York as he brings his band to the Beacon Theatre for four nights only! With a changing setlist, this is a not to be missed opportunity for Browne aficionados.

Inducted into the Rock and Roll Hall of Fame 2004

Inducted into the Songwriter's Hall of Fame 2007

Michael And Maria Maloney: “A show with something for everyone”

For those with a casual interest, you got your Pretender, Everyman, Running... more

Jim And Rory Mcdonald: “Me and my Son”

Sound good to you? Share this page on social media and let your friends know about Jackson Browne at Beacon Theater.