Greensky Bluegrass is also touring to:

You are viewing a past performance of Greensky Bluegrass 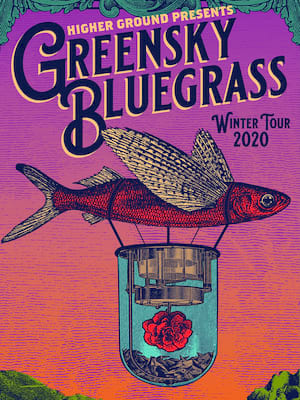 Greensky Bluegrass may not be your prototypical bluegrass band, not unusual these days, but 18 years in, the band seems to have played it right in following its own musical muses.

The band that creatively blends bluegrass and country music are heading on tour across America. Greensky Bluegrass began making music in 2000 and stood out for their non-traditional take on bluegrass, where they fused rock and acoustic influences. Nine albums later, the five-piece prepare for an outstanding countrywide tour in support of latest effort 'All For Money'

The band began in Michigan and has since has seen many changes, particularly to their line up. However, what remains the same is their original sound, compelling performances, and indisputable passion. The five-piece are known for their improvisation on stage as well as performing multiple sets at one show. As well as their original songs, the band has also covered some of the greats including The Rolling Stones, Prince, Aerosmith, and Bruce Springsteen.

Sound good to you? Share this page on social media and let your friends know about Greensky Bluegrass at Beacon Theater.