Sorry! You missed Not So Silent Night at Barclays Center 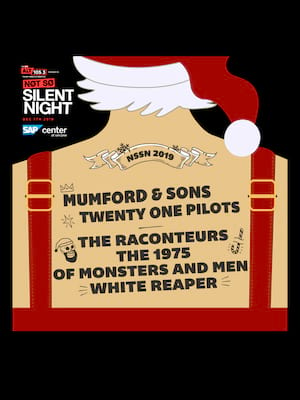 Not So Silent Night

Even the tales of death and discord that "Delta" brings to Mumford's joyous lyrical mien seem gleeful when played with a familial smile.

Why See Not So Silent Night?

Mumford and Sons Headlines Not So Silent Night

The home of the biggest alternative sounds on the Gulf South's airwaves, Alt 92.3 is back for another year of Not So Silent Night and taking no prisoners with a truly epic line-up. Rather than succumbing to the post Christmas party blues, why not spend a night in the company of English folk rock icons Mumford & Sons, Icelandic alt pop outfit Of Monsters and Men, classic indie rockers Vampire Weekend, raucous neo-punk pioneers Cage The Elephant, 'The Middle' hitmakers Jimmy Eat World, Judah & The Lion and SHAED.

Originally fusing bluegrass with folk, country and barnstorming, electrified rock, headliners Mumford and Sons burst out of the West London folk scene alongside fellow new traditionalist acts Noah and the Whale, Johnny Flynn and Laura Marling. Over the course of four studio albums, the band have evolved their sound to encompass elements of electronica, rap and jazz. Their latest offering Delta was recorded over the 100 collaborative sessions with artists and friends like Maggie Rogers and Gill Landry.

Sound good to you? Share this page on social media and let your friends know about Not So Silent Night at Barclays Center.