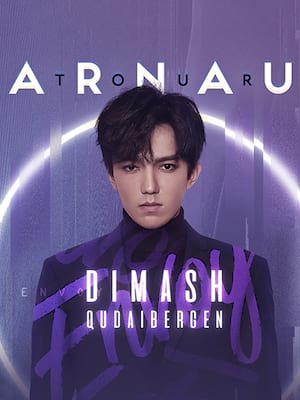 One of Central Asia's biggest stars!

Prepare yourselves Dears, The Six Octave Man, A.K.A Dimash Qudaibergen makes his US concert debut this December, bringing his undeniable talents to the Barclays Center stage. Known by US audiences following his sensational stint on 'The World's Best', this classical contemporary crossover artist is more than just a star on the rise - he's about to go stratospheric!

With a voice that can traverse six octaves (from bass to soprano) Qudaibergen is a huge name in not only his native Kazakhstan but across the globe. Citing his influences as Celine Dion, Pavarotti and Andrea Bocelli, he's been singing and performing as a multi-instrumentalist since a young age. Now ready to take on North America, it looks like the sky's the limit! Don't miss your chance to see his very first concert on our shores!

Dimash has such a versatile voice, he can sing opera one minuet, pop, rock... more

Sound good to you? Share this page on social media and let your friends know about Dimash Qudaibergen at Barclays Center.