Sorry! You missed Blink 182 and Lil Wayne at Barclays Center 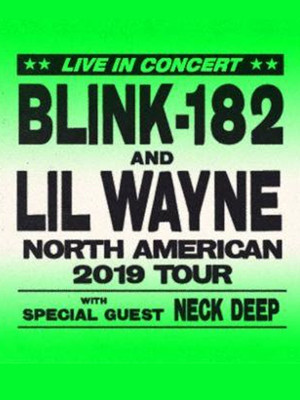 Blink 182 and Lil Wayne hit the road together!

Following the release of a special video which featured a mash up of 'A Milli' and 'What's My Age Again', legendary rockers Blink 182 are hitting the road on a joint, co-headlining tour with Lil Wayne. You'll also get to see pop band Neck Deep supporting the acts as they visit 38 cities across the U.S. and Canada.

Blink 182 also recently announced an upcoming album, which is set to drop any day! So expect to hear some of their new material live for the first time. Lil Wayne also tours on the back of his long awaited fifth installment of the Carter Series, which featured track 'Up Roar'.

Make sure you don't miss out on this joint tour of two great artists coming together!

While this tour pairing has already proved it will be filled with dramatics... more

Sound good to you? Share this page on social media and let your friends know about Blink 182 and Lil Wayne at Barclays Center.