Sorry! You missed All My Sons at American Airlines Theater 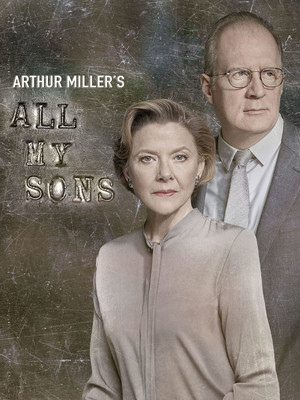 ...superb revival by the Roundabout Theatre Company. One of the dramatic highlights of the Broadway season, the production features outstanding performances from a stellar cast headed by Anette Benning, Tracy Letts and Benjamin Walker

Why See All My Sons?

Golden Globe winner and Tony Award nominee Annette Bening and Tony Winner Tracy Letts star in the Roundabout Theatre Company's production of Arthur Miller's 1940s classic, All My Sons. Directed by Jack O'Brien All My Sons explores the difficulties and secrets that plagued American families after the end of World War II.

All My Sons launched Arthur Miller's reputation as the voice of American theater, winning the New York Drama Critics' Circle Award on its Broadway premiere in 1947. The play has gone onto been revived twice on Broadway and a run in London's West End, with the 1987 Broadway revival garnering the Tony award for Best Revival of a Play, and received three 2019 Tony Award nominations!

What is All My Sons about?

As America deals with the aftermath of World War II, the Keller family are struggling to keep their heads above water. When a long-hidden secret threatens to rear its ugly head the Kellers must fight to keep their family in intact, forcing them to reckon with greed, denial and the plague of post-war disenchantment.

A breathtaking performance by the whole cast. After 72 years Miller’s... more

Superb play with a superb cast! This should have won a lot of Tony’s!... more

Sound good to you? Share this page on social media and let your friends know about All My Sons at American Airlines Theater.