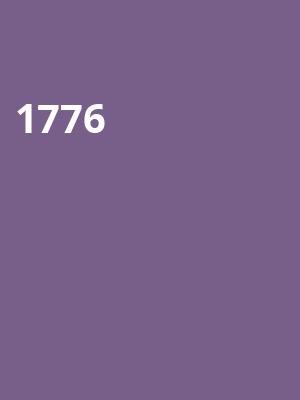 Images are copyright of the official production

The show is at its richest when the delegates' voices unite... The sound evokes the swagger that it took for a ragtag collection of settlers to snatch a prize from powerful England while laying the groundwork for a unique and vibrant nation.

Before hip hop blockbuster phenomenon Hamilton ruled the the Broadway roost, another historic musical got the country's patriotic blood pumping! First premiering on the Great White Way in 1969, Peter Stone and Sherman Edward's historical tuner 1776 garnered much critical acclaim as well as three Tony and two Drama Desk Awards for its gripping portrayal of the birth of modern America.

The celebrated musical's pulse-quickening action, witty dialogue, soaring melodies and original lyrics are set to captivate audiences once more in the hands of the Tony Award-winning American Repertory Theater Artistic Director Diane Paulus (Hair, Pippin) and Jeffrey L. Page. A partnership between ART and Roundabout Theater Company, 1776 started the revolution in LA and Boston in 2020 before making its hotly anticipated Broadway bow at the American Airlines Theater in 2022.

The story chronicles the direct aftermath of the American Revolution, finding a nation on the edge of a glorious new era but mired down by chaos and confusion. Founding father John Adams races against time and a frustrating tussle with congress to come up with a deal that gives George Washington and his outnumbered armies a legitimate reason to fight. His fellow founding fathers, including Thomas Jefferson and Benjamin Franklin, come to life as they push, pull and cleverly devise the historic Declaration Of Independence, amidst dazzling show tunes like 'Sit Down, John' and 'Momma Look Sharp'.

Sound good to you? Share this page on social media and let your friends know about 1776 at American Airlines Theater.