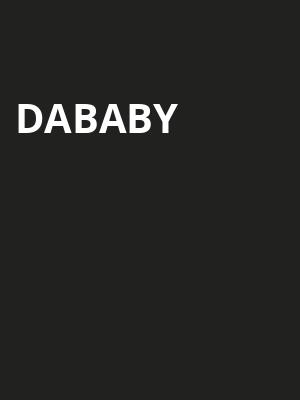 He is rap's brightest new star, the artist that connects all others

Armed with street smarts and determination, Jonathan Lyndale Kirk AKA DaBaby burst out of his home city of Charlotte, North Carolina with an attitude and hard core hip hop blend that made people take notice. Leaving behind a life of petty crime, he released his debut mixtape Nonfiction without any previous industry experience and cultivated an aggressive rap flow with the releases that followed. Don't miss DaBaby's coast-to-coast tour in support of his latest album Kirk, coming to a venue near you!

Contrasting the machismo of his fellow rappers, Dababy is pitched as a much needed breath of fresh air thanks to his humour, trademark lightning-fast rapping and a pop-rap sensibility that makes for easy repeat listening. Don't miss to see the rising star graduate to new heights on tour!

He’s inspired me to not give an dam what People think keep it up ps... more

Sound good to you? Share this page on social media and let your friends know about Dababy at Albany Capital Center.