What Did The Critics Think Of For Colored Girls...

Now playing at the Public Theater

Ntozake Shange's groundbreaking choreopoem has returned to New York this fall in the Public Theater's hotly-anticipated production. But, what did the critics think? Find out in our review round-up!

Time Out New York loved the production, saying that its "ingenious fusion of language, music and movement conjures one soul-stirring revelation after the next". They continued with praise for the cast saying, "The powerhouse ensemble includes rafter-splitting vocalist Sasha Allen (Lady in Blue), superbly expressive deaf actor Alexandria Wailes (Lady in Purple) and the razor-sharp Okwui Okpokwasili (Lady in Green)."

The Daily Beast continued the praise, calling the production "wonderful" before continuing with "For Colored Girls... transcends the time of its creation, and remains universal". Vulture mirrored the sentiment saying, "43 years on, For Colored Girls... comes alive at the Public Theater".

What is For Colored Girls... about?

Told through touching personal narratives, For Colored Girls features the stories of various women identified by a single color. The narratives are performed as poems presented with choreography and tackle themes relating to love, survival, loss and power.

For Colored Girls Who Have Considered Suicide/When the Rainbow Is Enuf is now playing at Martinson Hall through to December 1. 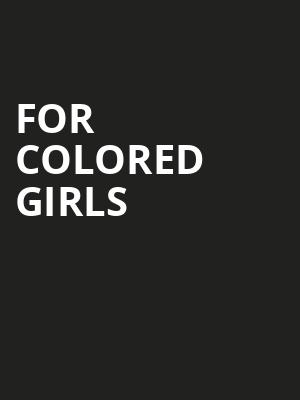 ingenious fusion of language, music and movement conjures one soul-stirring revelation after the next.