Playing through to January 5

Thomas Kail, Lin-Manuel Miranda and Anthony Veneziale's evening of improvised hip-hop has finally landed on Broadway! But, what did the critics think of Freestyle Love Supreme?

Unsurprisingly they loved it! Ben Brantley from The New York Times was full of praise for the production, saying, "This exultant evening of improvised rap...turns out to be a perfect fit for Broadway." He continued with, "theater doesn't get more live than this. "Freestyle" demands that you exist purely in the here-and-now of the show."

Vulture mirrored the sentiment and said, "Freestyle Love Supreme, like the quick-spitting rap style in its name and the improv comedy form it's built around, is held together by nerve and verve, good instincts and a lot of good will." Continuing with "It's high-energy, very sweet-natured fun."

The Hollywood Reporter said, "... this is definitely a show that rewards repeat viewings, if only to be amazed again by the endless ingenuity with which the performers devise their versatile routines."

WHAT HAPPENS IN FREESTYLE LOVE SUPREME?

Audiences are invited to suggest topics as the six/seven-piece, make up a brand-new and unique hip-hop musical on the spot! With no two shows ever being the same, witness the fast flows and spontaneous rhythms of the crew, and who knows you may witness the birth of the next Tony-winning hit!

Freestyle Love Supreme is now playing at the Booth Theater through to January 5, 2020. 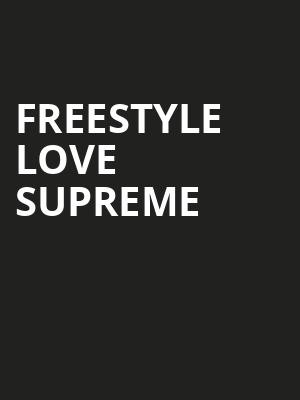 This exultant evening of improvised rap - created by Thomas Kail, Lin-Manuel Miranda and Anthony Veneziale - turns out to be a perfect fit for Broadway.