Meet The Queens of SIX 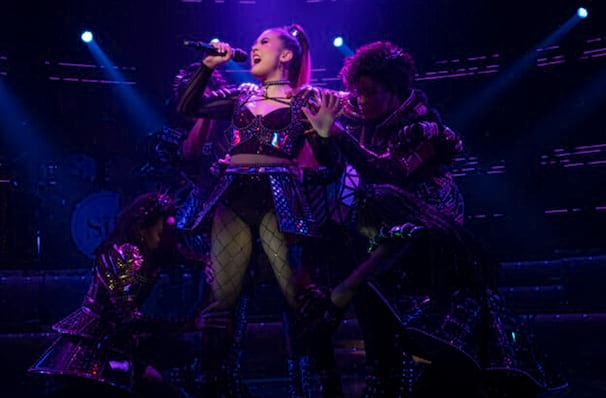 Get to know the new Royals of Broadway!

British sensation Six arrives on Broadway tonight (February 13)! Need to brush up on your history before seeing the show? Then read on as you meet the Queens of Six!

England's Tudor King Henry VIII's hunt for an heir and his love of beheadings has made him one of the most famous monarchs in history, with the tale of his six unfortunate wives the stock of any British school history lesson. Created by Toby Marlow and Lucy Moss (Broadway's youngest female director in history!) Six tells the story of these famous, yet sometimes forgotten, women in their own words...

The OG wife, Catherine (the first) was steadfast and stoic in the face of Henry's philandering. Originally married to Henry's brother, Arthur, Catherine was Henry's longest-serving (and suffering) Queen. Married to Henry for almost 25 years Aragon was seemingly tossed aside for the hotter and younger Anne Boleyn after she couldn't produce him a son and heir. Catherine had borne Henry a son but unfortunately, he passed away when he was 52 days old. Catherine did produce Henry an heir (although he would never know about it) in the shape of Mary I who was the first Queen of England and Ireland and reigned for five years.

As Henry's most famous wife poor Anne didn't have the best of times, or the brightest of endings, with the famous Tudor King. The cause of England breaking away from the Roman Catholic Church and the subsequent formation of the Church of England Anne Boleyn continues to be the subject of much fascination.

Although Anne and Henry courted for almost seven years the pair were only married for three before Henry had her brought under investigation for high treason. It seems like the restless King once again got bored when no son and heir was forthcoming. After being found guilty for adultery, incest and plotting against the King (most likely all untrue) Anne was beheaded on 19 May 1536.

Anne did give birth to Elizabeth I who became one of the UK's most powerful and famous Queens (but don't let Henry know).

Henry's third wife finally gave Henry what he always wanted, a living son. Seymour was praised for her gentle and peaceful personality and is reported to be Henry's most favored wife. Unfortunately, Jane didn't get to see her little boy grow up and died just two weeks after giving birth. However, Jane was the only one of Henry's Queen's to receive a Queen's funeral and was the wife who Henry chose to be buried with upon his own death in 1547.

The last three wives of Henry VIII are famously less well known than their predecessors. However, Anna (or Anne) of Cleves was probably one of the happiest. Although they were only married for six months Cleves and Henry's annulment was a happy one. Anna happily gave up her marriage and queendom which resulted in her and Henry becoming close friends. Anna lived out the rest of her days as one of Henry's most favored courtiers and an honorary family member being known as "the King's Beloved Sister".

Poor Katherine Howard, Henry VIII's fourth wife, matched the same end as her cousin Anne Boleyn. Katherine's life had been turbulent, repeatedly molested by her music teacher when she was a child Howard grew up to be embroiled in many extramarital affairs, although if any were consensual is still unclear.

When Katherine married Henry it was rumored that she soon started a relationship with a courtier, Thomas Culpeper. The Archbishop of Canterbury, Thomas Cranmer, used the rumors of this affair to weaken Katherine's uncle's (The Duke of Norfolk) power in court and began a campaign to get rid of Katherine. Katherine was beheaded in 1542 when she was about 19 years old.

Henry's last and surviving wife Catherine Parr (Catherine was a popular name in Tudor England!) saw the King through his final years before he died in 1547. During her marriage to Henry Catherine faced a plot to get rid of her by some anti-protestant officials. They continually tried to turn the King against her and even drew up a warrant for her arrest, fortunately, Catherine outwitted them all and reconciled with Henry, escaping a gruesome end.

After Henry died Catherine married her beloved Tomas Seymour (a man who she began a romantic relationship with before she married Henry), unfortunately, their reunion was shortlived as Parr passed away in the September of 1548 after giving birth to her only child, Mary.

It's safe to say that most of Henry VIII's wives didn't have the most of joyous of times as the King's Queen. With history mainly focussing upon Henry VIII himself, most of these Queens have passed through time without much fuss. But! Six is here to bring these women's stories out into the light and turn history into HER-story!

BOOK YOUR TICKETS TO SIX ON BROADWAY HERE

After taking London and the whole of the UK by storm over the last two years Toby Marlow and Lucy Moss' pop musical SIX has arrived on Broadway. Re-writing Tudor history and the terrible fates of the notorious...more info