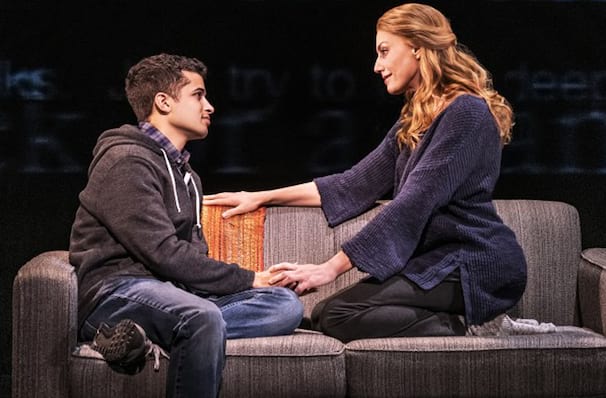 Christmas is in two days, help! Check out our Christmas Gift Guide and get some last-minute gift inspiration for the theater lover in your life. Plus with our eTickets, you can download their present almost instantly, phew!

For The Musical Fanatic

HAMILTON (Richard Rodgers Theater): This epic musical phenomenon has taken the world by storm! Give the Hamilton super-fan in your life a chance to see this multi-award winner where it all began... on Broadway! BOOK TICKETS

MOULIN ROUGE! THE MUSICAL (Al Hirschfeld Theater): This opulent musical extravaganza is the most thrilling night out at the theater! Based on the original Baz Lurhmann movie, Moulin Rouge! The Musical features over 70 top ten hits from the last century, richly designed sets and costumes and performances that will leave you amazed! BOOK TICKETS

For The Drama Lover

TO KILL A MOCKINGBIRD (Shubert Theater): Aaron Sorkin's acclaimed adaptation of Harper Lee's classic novel continues at the Shubert Theater! A simmering portrayal of mounting racial tension in a small southern town, To Kill A Mockingbird is one of the greatest novels of our age. Give the drama lover in your life the chance to see this magnificent production live on Broadway this Christmas! BOOK TICKETS

THE LEHMAN TRILOGY (Nederlander Theater): The Olivier Award-nominated The Lehman Trilogy returns to New York to complete its Broadway transfer. Thrilling audiences off-Broadway last year The Lehman Trilogy is a masterful epic that charts the rise, and fall, of one of the most powerful families in America. BOOK TICKETS

THE INHERITANCE (Ethel Barrymore Theater): Hot off an Olivier Award-winning run in London, Matthew Lopez's epic The Inheritance is here to take Broadway by storm! A winner with critics and audiences alike, this heartfelt production will make a gorgeous Christmas present for your loved one! BOOK TICKETS

For The Comedy Enthusiast

JERRY SEINFELD (Beacon Theater, multiple dates): The iconic comedian continues his Beacon Theater residency into 2020! As one of the world's greatest comics, Seinfeld has been entertaining audiences with his witty observations since he first took to the mic in 1976. BOOK TICKETS

ILIZA SHLESINGER (Beacon Theater, March 21): The only female winner of NBC's The Last Comic Standing Shlesinger has enjoyed a stratospheric rise to fame over the last few years. Bold, brash and hilariously funny Shlesinger shows no sign of slowing down and is set to become one of North America's favorite comics. BOOK TICKETS

RICKEY GERVAIS (Madison Square Garden, May 14 - 15): The straight-talking Brit returns Stateside with his mega-show SuperNature! Be prepared for Gervais' trademark sarcasm and scouring satire as he dispels with superstition and tells you why Nature is already super enough! BOOK TICKETS

FOR THE LIVE MUSIC DEVOTEE

ELTON JOHN (Nassau Coliseum, April 17 - 28): After 50 years in the 'biz Elton John is heading out with his plethora of top hits on one final tour before he retires! Don't let the Elton John fan in your life miss their chance to see him live, one last time, and give them a Christmas present they'll never forget! BOOK TICKETS

MICHAEL BUBLE (Nassau Coliseum, March 24): Buble is back! The Canadian Crooner is heading out on tour in support of his 2018 album, "Love". An evening that is sure to be full of romance and sensational music don't miss your chance to treat that special someone in your life! BOOK TICKETS

CELINE DION (Barclays Center, February 28 - March 5): The iconic Canadian singer is back where she belongs with her Courage World Tour! Bombastic, emotional and entirely unique, Celine Dion's approach to a ballad is iconic, with hits like the Titanic theme 'My Heart Will Go On', 'All By Myself' and 'The Power of Love' smashing chart records worldwide. BOOK TICKETS