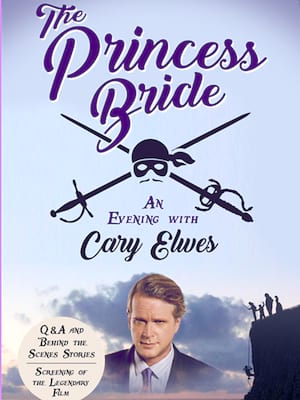 Why See The Princess Bride: Film Screening with Cary Elwes?

The iconic family movie that made stars out of Robin Wright, Andre The Giant and of course, the gorgeous Cary Elwes gets a special screening during with the man himself appearing on stage to talk! Now a colossal three decades old, the movie that made us swoon over Westley and quote "As You Wish" to our heart's content remains as popular as ever, even emerging unscathed during its Honest Trailer treatment! Together with this screening, Elwes will speak about the movie that catapulted him to stardom, sharing little-known stories from the set.

A huge hit at the time of its release in 1987, it entered the National Film Registry in late 2016, as being "culturally, historically or aesthetically significant". With millions of movie fans across the world, Elwes has recently published his memoirs of the movie, titled As You Wish: Inconceivable Tales from the Making of The Princess Bride, co-written with Joe Laydon.

Omg, I loved this so much! First, seeing the movie on the big screen was... more

Sound good to you? Share this page on social media and let your friends know about The Princess Bride: Film Screening with Cary Elwes at Prudential Hall.