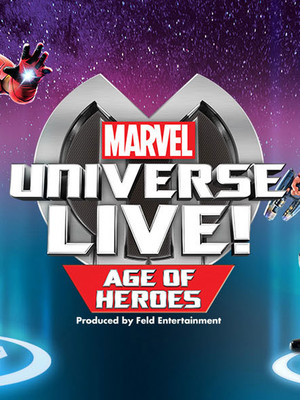 Family ShowsTheatre for Kids and Families

TIME TO SUIT UP AND CHOOSE A SIDE

This year you're being invited to team up with the best of the best, as Marvel's superheroes bring a huge, arena-based spectacular to your city. Watch as The Avengers, Spiderman and Wolverine battle the most outrageous villains from the Marvel-verse! Now in a brand new show, Age Of Heroes, some of Marvel's newest characters take centre stage too including the Guardians of the Galaxy!

SO CAP, WHAT'S THEIR PLAY?

The production sees Marvel and Feld Entertainment (the company behind Disney's popular 'On Ice' touring shows) join forces for the first time. Following on from the world-wide success of The Avengers and the Spiderman/Wolverine/X-Men reboots, this hero-filled spectacular is a mind-blowing show unlike anything you've seen before. Watch your favorite Marvel Super Heroes including Spider-Man, Iron Man, Hulk, Black Widow and all their villainous foes come to life in an action-packed arena show!

BRINGIN' THE PARTY TO YOU!

Feel that energy when you see the cutting-edge special effects, pyrotechnics, aerial stunts, martial arts, motorcycles and more. It's being hailed as the most technically advanced live show ever. Join Marvel fans of all ages for this once-in-a-lifetime, monumental performance. The fate of the universe depends on it!

Suitable for ages 5+ but welcome all Marvel fans! There will be loud noises and pyrotechnics throughout.

Two hours with one 15-minute intermission

It was amazing took my grandson & he still talks about it .he wants to... more

Sound good to you? Share this page on social media and let your friends know about Marvel Universe Live! at Prudential Center.