Sorry! You missed Made in Puerto Rico at Victoria Theater 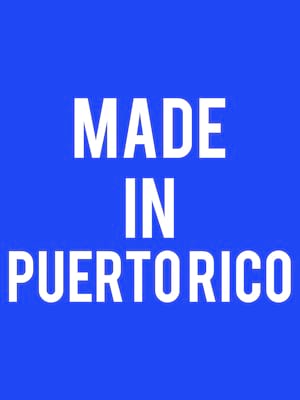 Made in Puerto Rico

In this acclaimed one-man performance, writer and comedian Eli Castro explores what it means to be Puerto Rican and live in the United States.

Why See Made in Puerto Rico?

Comedian Eli Castro explores Spanglish culture and Puerto Rican traditions through his hilarious and riveting stand-up. Throughout his time on the comedy circuit, Castro has been featured on hit shows 'Good Day New York, 'The View' and 'Un Nuevo Dia.' He has also had his work watched by universities nationwide including Northwestern University Law School and the University of Connecticut. This November, he takes the New Jersey Performing Arts Center's stage.

Throughout his career, Castro has written and performed eight excellent one-man shows that are relatable to all, regardless of nationality and cultural identity. Speaking on the show's Off-Broadway debut, CNN mentioned: "although Castro developed the one-man show more than a decade ago, it has never been more relevant."

Sound good to you? Share this page on social media and let your friends know about Made in Puerto Rico at Victoria Theater.