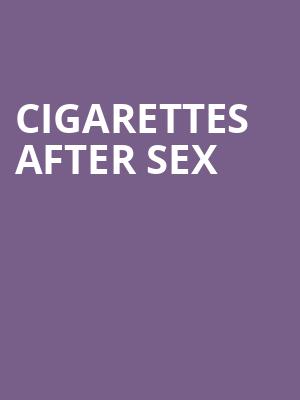 Hushed and subdued, every song on their eponymous debut album proceeds at more or less the same somnambulant pace, the echoing guitars and softly tapped drums gently supported by washes of ambient synthesiser.

Why See Cigarettes After Sex?

After releasing their self-titled, first full-length record in 2017 Cigarettes After Sex are back on tour in 2022, in celebration of five years since their debut. The band gained interest with their soft pop sound, delicate vocals, and easy listening music videos. The four-piece have amassed millions of views on YouTube and have garnered fans across the world.

The band which was formed in El Paso, Texas in 2008 by founder and guitarist Greg Gonzalez is now based in Brooklyn, New York and they have since become well known for their melodic tunes fused with poignant lyrics about love and life.

Cigarettes After Sex's 2012 single 'Nothing's Gonna Hurt You Baby' was featured on the Emmy award-winning The Handmaid's Tale in 2017. The band has received over 120 million Spotify streams and 210 million YouTube views since their formation, predicting that their intimate and entertaining songs will continue making an impact in the music industry.

This show felt like an unbelievable dream! I could have closed my eyes... more

The energy building in the venue was amazing as the eclectic crowd anticipated... more

Sound good to you? Share this page on social media and let your friends know about Cigarettes After Sex at Rumsey Playfield SummerStage Central Park.