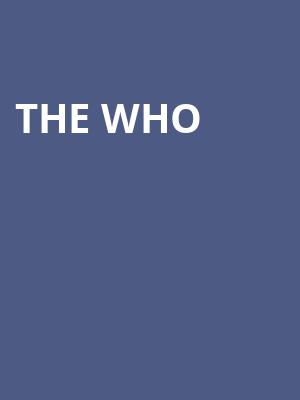 He is in the storm, he and Daltrey both, performing with a vibrancy for which their successors merely strive, the timeless aspects of The Who's manifesto running strong amongst the currents.

Why See The Who?

The Who Hit Back

The Who remain a potent force on the rock music scene. And after two years away from the open road, fans will be delighted to hear that the world's most untameable rock band are back! On announcing this new trek, titled 'The Who Hit Back', which will see the group once again backed by a live orchestra at each date, lead singer Roger Daltrey commented "Pete and I said we'd be back, but we didn't think we'd have to wait two years for the privilege...This is making the chance to perform feel even more special this time around." We're right there with you, Rog!

Expect to hear all The Whos' greatest hits, along with new material. For the tour, the band will be rounded out with familiar The Who players including Loren Gold on the keyboard, Jon Button on bass and Zak Starkey on drums.

It is generally acknowledged among rock fans that The Who in their heyday were the most exciting live band on the planet, with their Live at Leeds album (1970) hailed as the greatest live album of all time. The compositional skills of Pete Townshend have always been way beyond the conventional, as is proven not only in classic songs like 'My Generation' and 'Baba O'Riley' but also in his two great rock operas (a form he more or less invented single-handed) Tommy and Quadrophenia.

Sound good to you? Share this page on social media and let your friends know about The Who at Bethel Woods Center For The Arts.