First Look At Adam Driver And Keri Russell in Burn This!

Now in previews at the Hudson Theatre.

Stars of stage and screen Adam Driver and Keri Russell are currently lighting up Broadway in Lanford Wilson's Burn This. With opening night scheduled for April 16 take your first look at the pair in action in these newly released images!

This 2019 revival of Wilson's feisty drama is directed by Michael Mayer and also stars David Furr and Brandon Uranowitz.

What is Burn This about?

Written during the height of the AIDS epidemic, Burn This examines the pain of mourning and how a terrible tragedy can re-shape the lives of all those around it. Robbie and Dom, a young gay couple, have been killed in a boating accident, and following the funeral, a collection of friends and family members gather at Robbie's loft. Among them are Robbie's former roommate Anna, a sensitive soul lumbered with a rather placid boyfriend, and Robbie's drug-addicted brother Pale, a go-getting restaurateur who was conflicted over Robbie's sexuality.

With an undeniable sexual attraction pulsing between them, and a well of grief in both of their hearts that they can't express, Anna and Pale are drawn together, but can the romance move beyond mutual consolation into something more meaningful?

Burn This is now in previews at the Hudson Theatre. 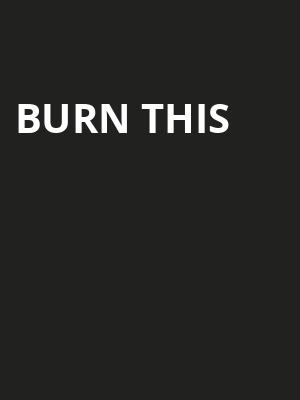 'Burn This,' directed by Michael Mayer and co-starring Keri Russell, he [Adam Driver] is finally allowed to unfurl onstage the distinctive energy and insight that have characterized his subsequent performances in film...and television